Last week both Levatić brothers visited 9th Mountain Film Festival Domžale, where we went to hear and meet two true legends of the sport. Let’s go in order of appearance:

Legendary climber Lynn Hill from America had a lengthy lecture about her life as a climber (and lately as a mother), in which she covered all her periods of life – from risky trad climbing beginnings to competitions, TV fame, then sport climbing achievements, to the ultimate – first person ever to free climb the famous route Nose in Yosemite. Now being a mother, she is still involved in the climbing world, giving lectures and doing appearances in Petzl roc trips.

She covered a lot of ground with the lecture, showing quite a few rare photos, and even mentioning she was earning more money from climbing back in the day than the pros of today – she managed to buy a house in France and pay for the expensive education in America all with only climbing. 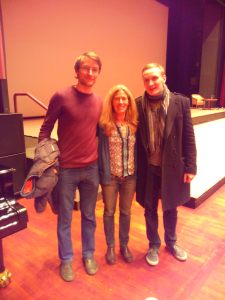 Levatić brothers with Lynn Hill. What a moment!

Lecture left me with a strong desire for a long one-on-one conversation about climbing and life in general with Lynn. She really has a lot to tell, and an hour plus of lecture is too short to convey her greatness – which is probably only matched by her simplicity and approachability.

As he is called in Italy, Il Mago is a man from different era than today, both in climbing terms and as a human. He is a type of man who will no longer come by, and even his stance while waiting for the lecture to begin – is different and old school. He was born and raised in the far mountains, and in his early climbing photos he looks more like a caveman than a climber, being somewhat strange compared to our shiny pros of today.

The most fascinating fact about this man is that he achieved his peak in his 50s – he climbed the hardest grades in the world (8b+) in the 80s, and then pursued other climbing and outdoor activities. Then in 2000s, intrigued by the simple question “Where are my limits?”, he went out to seek them. And found them he did – he climbed 9a on a pure slab at 51 years of age, along with a list of other hard ascents.

Maybe the best explanation of this man is a simple fact that the answer to the question “What motivated you to seek your personal best at 50 years of age?” from the audience (asked of course by us) is the fact that his answer lasted for a good 15 minutes – and it would probably be going on all night had he not realized there are other people with questions waiting.

During the lecture, words often used by Manolo were creativity and curiosity, both of which are beautiful things to drive a man (or woman) forward. Climbing is an immediate creative experience – once you step foot on a rock the puzzle starts. Somebody can tell you how to put the pieces together, or you can try the pieces by yourself, or you can even create the puzzle by yourself – but the creative part is always there with climbing.

More about Manolo:
Video story of Manolo’s ascent of Eternit (9a)

Meeting and listening to such great personalities of our sport was inspiring, and quite worthwhile. Impressions I got from both were that their motivation for climbing was first and foremost personal, and internal.  They were both grateful and very approachable, and interested in people around them.

It was an honour to witness the simplicity of greatness in this exceptional man and woman, two traits which don’t really come together that often. 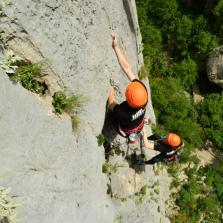 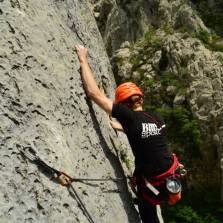 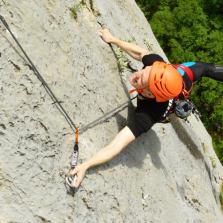